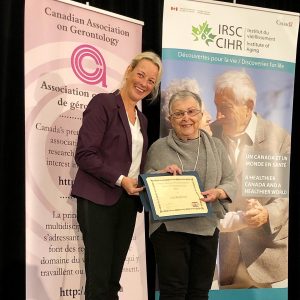 Faculty of Education PhD candidate Lois Kamenitz has been awarded the Schlegel-University of Waterloo Research Institute for Aging Scholarship by the Canadian Association on Gerontology. The award recognizes academic success and community involvement with older adults and supports doctoral students whose programs of study relate to gerontology.

Kamenitz has more than 35 years of experience in Education. After a long career as an educator and counsellor at various levels including elementary, secondary, and post-secondary, Kamenitz obtained a Master’s Degree in Library and Information Studies at Dalhousie University and continued to work in a volunteer capacity as a key enabler of consumer health education.

In addition to a long career dedicated to education, health and wellness as well as volunteer service with older adults, Kamenitz’s interest in gerontology actually dates back to her childhood. Kamenitz was raised by her grandparents and grew up an only child in a multi-generational household. “I was surrounded by older people whose company I always enjoyed” she said.

As a PhD candidate in the Faculty of Education, her research focuses on the reasons why later life women (women over fifty-five) return to graduate school to pursue a PhD. Her study examines the socio-cultural, economic and aging factors that pull older women back into university and how these experiences shape their accomplishments, sense of self, personal identities and life goals. Kamenitz has sampled this growing population in order to contribute to an expanding literature on gender, education and aging.

Kamenitz herself started her doctoral studies at age seventy. “I am in a unique position as I interview women in their late fifties, sixties, and seventies who have embarked on their own doctoral journey,” she says. While adding to the body of literature on older women doctoral students, Kamenitz’s research also has the potential to contribute to a shift in the conversation about age and ageing. “My research also has implications for younger doctoral students and it has the potential to lead to further studies, all with a view to transforming societal structures and relationships.”

The Schlegel-University of Waterloo RIA Scholarship permits Kamenitz to focus on her research by assisting with travel costs to conduct interviews, transcribe the interviews, and analyse data. The scholarship acknowledges the value of her research and its potential to bring about change in the field of gerontology.

“Traditional stereotypes of old age are challenged by the post-war ‘baby boom’ generation. Now, there is an emphasis by “boomers” on enhancing mental capital and promoting wellbeing in later life through a range of learning opportunities including a return to higher education deferred over the life course by many, but especially by women.” Kamenitz’s research is key to shaping a response to this demographic change.