Professor Steven Alsop, Faculty of Education, and Professor Dawn Bazely, Department of Biology, made the long trip to Churchill, Manitoba in late October to engage the community in an open-access archive of Churchill-based research that is housed at YorkSpace, York University’s Institutional Repository. Their efforts were funded by Wapusk National Park. 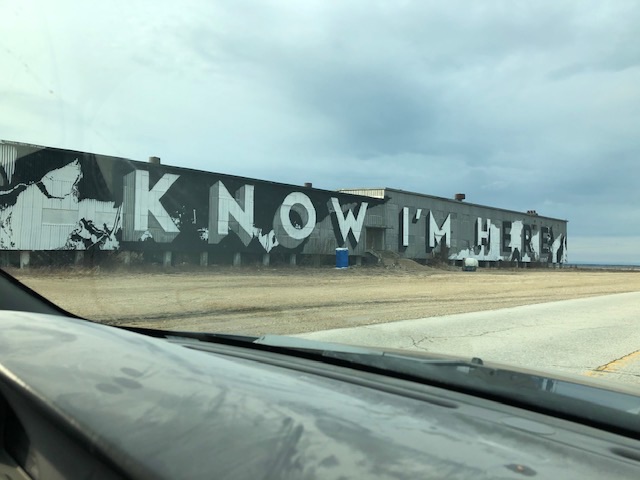 Know I am here (building and artwork in Churchill)

Churchill is known as the Polar Bear Capital of the World because one of the largest concentrations of polar bears worldwide gathers there each winter waiting for the ice to freeze. The town, population 800, located at the 59th parallel, is home to the Churchill Northern Studies Centre. For decades, researchers from around the world – including Bazely, who did her master’s degree research in Churchill -- have worked there, studying the subarctic region’s flora and fauna. Research conducted in the centre has played a key role in global climate change predictions and associated Intergovernmental Panel on Climate Change reports.

Bazely has been the prime curator of the free archive, called the Churchill Community of Knowledge archive. Its information has been collected with the help of scientists who spent much of their academic lives in Churchill; 50 York University students have been assisting by digitizing selected artifacts. The archive contains not only the research, but the scientists’ notebooks and photos, which document life in Churchill during their time.

Bazely and Alsop want to encourage the community to keep the archive alive with their own photos and stories of the town over the years. It is part of a broader project of curating the natural and cultural history of a special and highly influential, albeit remote, place. The polar bear statue with the Manitoba Seaport sign, and the railway line with the grain elevator in the back ground (Churchill, Manitoba)

“After all, the science research that has taken place here is only made possible by support of the community around it. The archive, in this respect, seeks a situated representation of scientific work – work that is always within particular social, cultural, ecological and community contexts. If this archive is going to live, the different groups associated with the scientific research need to identify and see themselves in it.”

During their visit, Alsop and Bazely scheduled a series of public and targeted talks and presentations and meetings with key people in the community to introduce the archive, get feedback and talk about its value to Churchill. Their audiences included staff from Wapusk National Park, park visitors, the Churchill Northern Science Centre’s science team and students in Grades 5 to 9 at the local Duke of Marlborough School. They also met with the local librarian/archivist, local museum staff, the executive director of Polar Bear International and a Sayisi-Dene culturalist. Bazely also did an interview on CBC Radio.

“Although a digital archive might not sound like the sexiest topic in the world, we were overwhelmed by the profoundly positive reaction,” Alsop said. “We became aware of the transformative possibilities of natural history and scientific research:  a small town, on the cusp of the arctic recognizing its fundamental role and value in the future of the world.”

As a result, he has agreed to explore grant opportunities for a more formal conference about the value of these kinds of online archives, and future possibilities and directions for the Churchill Community of Knowledge. He also plans to work with local Churchill artists on the possibility of a youth-focused theatre production, exploring the life of students in Churchill, and connecting this with the digital archive. Meanwhile, Bazely will help the local librarian/archivist explore how the archive could support local historical projects/research.

“It’s wonderful that the community wanted this and wanted to be part of it,” Alsop said. "It feeds so nicely into the local ‘know I am here’ narrative that was so beautifully captured by the town’s Seawalls project, co-ordinated by the Winnipeg artist Kal Barteski.”