Today the leaders of A Way Home Canada (AWHC) and the Canadian Observatory on Homelessness (COH) celebrate the launch of the Making the Shift (MtS) Youth Homelessness Social Innovation Lab. Making the Shift is a Network of Centres of Excellence (NCE) with an initial investment of $17.9 million over five years from the Government of Canada’s Research Tri-Council. Leveraging the strengths of lead partners the COH at York University and AWHC, MtS’ vision is to establish Canada as the world leader in research and knowledge mobilization specific to youth homelessness prevention and sustained exits from homelessness. Through partnership and collaboration, the focus of the work will be to inspire and support a shift away from the current emergency response towards a more effective emphasis on youth homelessness prevention and housing stabilization. This approach to social innovation will be achieved through program design, research and evaluation, and knowledge mobilization.

Making the Shift is set up as a stand-alone not-for-profit entity co-directed by President & CEO of the Canadian Observatory on Homelessness and York Professor Stephen Gaetz, who will function as the “Scientific Director” and President & CEO of A Way Home Canada, Melanie Redman, who will act as the “Partnership and Implementation Director” for the life of the project. The Board is Chaired by Elizabeth McIsaac, the President of Maytree, and includes an impressive roster of Canadian and international leaders.

The competition for the Networks of Centres of Excellence program was stiff. Out of 69 viable Expressions of Interest submitted in the fall of 2017, 11 were invited to submit a full proposal. York University and the University’s Faculty of Education supported a 6-month process where AWHC and COH convened national and international researchers, policy makers, service providers, legal experts, funders, and scholars with lived experience of youth homelessness to develop the full vision for MtS.  The leadership team was then subject to an in-person interview in Ottawa in August by a panel of international experts, learning in December 2018 of their successful bid. Though the award was officially announced in April 2019, the celebration event featuring Member of Parliament Adam Vaughan, takes place today at York University, hosted by President Rhonda Lenton. 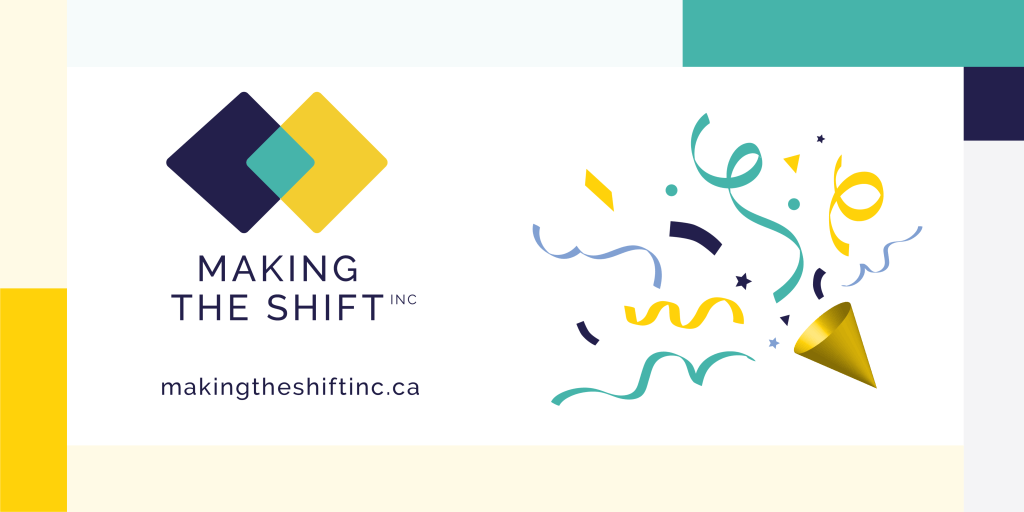 The term “Making the Shift” may sound familiar, and with good reason! The genesis of the Making the Shift Youth Homelessness Social Innovation Lab is the Making the Shift Youth Homelessness Demonstration Projects (MtS DEMS), also co-led by AWHC and COH with support from the MaRS Centre for Impact Investing. Funded in 2017 by the Government of Canada’s Youth Employment Strategy with a project extension and additional investment announced just last week, MtS DEMS offers a space to develop, refine and test models of prevention and Housing First for Youth in real time in 10 cities in Ontario and Alberta. At the same time, these models are undergoing rigorous research and evaluation in order to both strengthen the service delivery, and therefore ensure the best possible outcomes for young people and their families, but also to contribute to the body of knowledge generated by the MtS Youth Homelessness Social Innovation Lab. In subsequent phases, MtS DEMS will continue to function as the space within the MtS Youth Homelessness Social Innovation Lab for testing additional models of prevention and supporting sustained exits from homelessness.

Over the next five years, MtS will be running a series of research competitions based on the MtS research program. The MtS research program is guided by five intersecting research themes designed to most effectively achieve MtS’ mandate. There are two core themes that make up the foundation of the project and they are: (1) shifting to prevention through early intervention, and (2) sustaining successful exits from homelessness. In addition, there are three cross-cutting themes that support the work of the core themes. They are: (3) enabling health, well-being and inclusion; (4) enhancing outcomes for Indigenous youth (led by Indigenous researchers); and (5) leveraging data and technology to drive policy and practices. 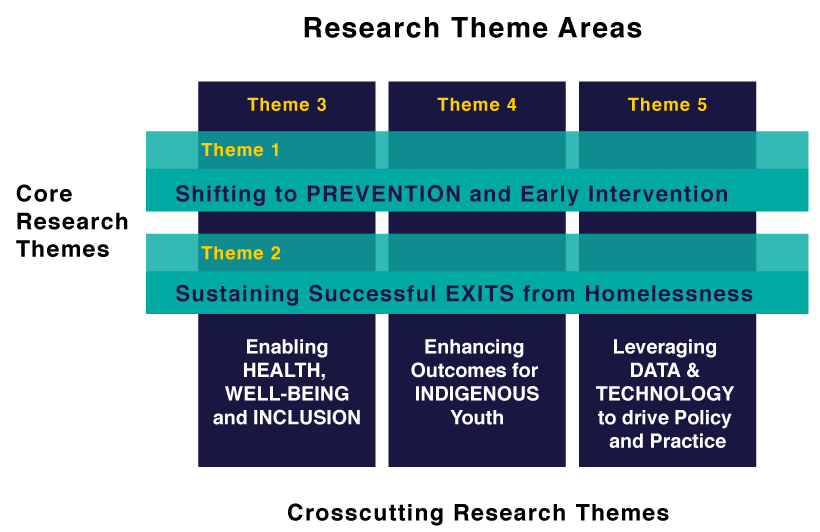 MtS recently launched their first Call for Expressions of Interest for the first competition (the call is now closed, but stay tuned for subsequent calls in the coming years). Those invited to submit full proposals will be subject to a rigorous selection process led by researchers, policy makers, legal experts, funders, service providers, scholars with lived experience of youth homelessness and international experts.

In addition to MtS' ability to fund and mobilize quality research, the NCE Program also allows support for the development of “Highly Qualified Personnel.” This component of the work will allow MtS to not only support a new generation of graduate students and postdoctoral fellows to take up the work, but it also supports other “end users” such as service providers, legal experts, funders and policy makers to gain from the expertise on youth homelessness prevention and sustained exits emerging from the MtS research and network.

Finally, MtS will host a number of events and conferences over the initial 5 years of its mandate. These events will leverage both national and international partners, experts and researchers. MtS believes that there is magic in bringing people together to not only share innovations and learning in policy and practice on youth homelessness prevention and sustained exits, but to also build the kind of relationships and trust that foster additional innovation and learning. Based on the strength of the MtS research program, the leadership of the COH and AWHC, and collaboration with existing and emerging partners, will produce knowledge and mobilize impact by providing communities with the knowledge, data, tools and resources that shifts Canada’s response to youth homelessness within the next five years.

Article originally published May 23, 2019 on A Way Home Canada blog