Faculty of Education Associate Professor Qiang Zha is one of three editors of a book that explores how Canada contributed to China’s transformation through university partnerships. 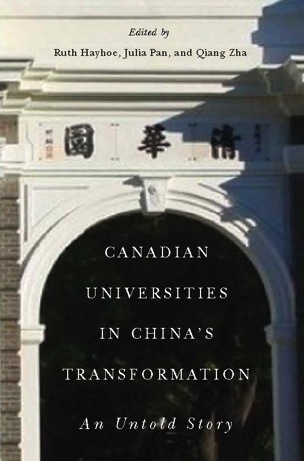 Canadian Universities in China’s Transformation: An Untold Story (McGill-Queen’s University Press) will be available in June 2016, and orders for the book can be placed now online at www.mqup.ca.

Zha says the book presents the story of universities working together shortly after the Cultural Revolution, and gives a unique account of partnerships between Canada and China in knowledge production and application, and their resulting impacts.

It covers the three major national-level programs at work: The Canada-China Management Education Program (CCMEP), which linked eight major national universities on both sides; The Canada-China University Linkage Program (CCULP), which included a wide range of universities, both national and local, on both sides; and, The Special University Linkage Consolidation Program (SULCP), which provided ongoing funding for the consolidation of eleven CCULP projects.

In addition to these three programs, which attracted $68.7 million dollars in total, there was a wide range of other projects in human resource development involving diverse partners, including community colleges, the business community, and a range of non-governmental organizations.

A total of about $250 million dollars was expended by CIDA on higher education between 1981 and 2001.

Canadian universities played a key role in all these programs of collaboration, and a unique aspect of the first decade of these programs was the fact that Canada was the only Western country to engage with Chinese universities in its development aid at a major programmatic level at that time.